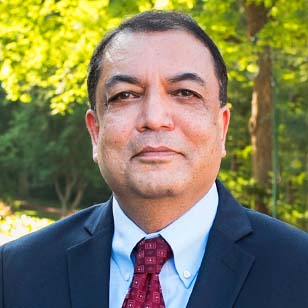 Raj Acharya serves as associate vice president for research and AI innovation. His research interests are in the general areas of AI/ML and Data Science. In this new role, Acharya will develop the new Indiana AI Collaboration Center. The center will facilitate collaboration between IU Bloomington, the Naval Surface Warfare Center Crane, the Indiana National Guard’s new Cyber Battalion, and the Indiana industry on the development of AI applications in areas that include microelectronics, cybersecurity, supply chain integrity, and fraud prevention and detection.

Acharya also serves as the Director of Academic Engagement for Joint Artificial Intelligence Center (JAIC)/Tradewind in collaboration with IN3.

Acharya served as Dean of the Luddy School from 2016-20. He cultivated and secured a $60 Million gift from Fred Luddy to name the School as Luddy School of Informatics, Computing, and Engineering. This is the second largest private gift in Indiana University's history and includes a $22 Million gift to create the Center for Artificial Intelligence. He also oversaw the successful launch of IU's first ever engineering program. He also initiated undergraduate degrees in Data Science, and Cybersecurity & Global Policy (jointly with Hamilton Lugar School of Global and International Studies).

Prior to his tenure at IU, he was Founding Director, School of Electrical Engineering and Computer Science (containing the Departments of Electrical Engineering and Computer Science & Engineering respectively) and Head at Penn State for 14 years. During his tenure at Penn State, research expenditure improved from 64th (2001)  to 8th (2016) in the nation. The Department was awarded $48 Million US Army CRA award (Network Security), $10 Million NSF Expedition award, and $35.5 Million US Army Network Sciences Center.

He also held an appointment at Penn State’s Applied Research Laboratory for conducting classified research. He was previously a Research Scientist at General Electric (Thomson) CSF Laboratory, Paris, France, and has been a Research Fellow at NASA Johnson Space Center, US Air Force Wright Labs, and US Army Center for Night Vision and Electro-Optics. He is on the board of Videomining, Indiana Ventures, and Techpoint.