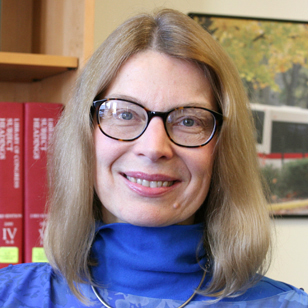 Susan C. Herring’s first intellectual passion was foreign languages. After being employed as a Graduate Student Instructor in the French Department and then the Linguistics Department at the University of California, Berkeley in the 1980s, Herring was appointed to teach Tamil, the South Dravidian language she researched for her doctoral dissertation, in the Special Languages Program at Stanford University in the spring of 1989. In the same year, she was hired as an Assistant Professor in the English Department at California State University, San Bernardino, to teach discourse analysis, and promoted to Associate Professor in 1992. She then moved to the University of Texas at Arlington as an Associate Professor in the Linguistics Program, where she taught from 1992 to 2000.

During the 1990s the internet was expanding rapidly, and Professor Herring’s research interests shifted from linguistics to computer-mediated communication, which was a new field at that time. In 2000, she joined the School of Library and Information Science (now the Department of Information and Library Science) at Indiana University, where she was promoted to Professor in 2002. She also holds an Adjunct Professor appointment in the Linguistics Department at Indiana University. She is Director of the Center for Computer-Mediated Communication, which she founded in 2014, and a Fellow of the Rob Kling Center for Social Informatics. In 2012-2013, she was a Fellow at the Center for Advanced Study in the Behavioral Sciences in Stanford, California, and in 2015-2018, she was a Visiting Research Associate at the University of California, Santa Cruz, studying telepresence robot communication. She is a past editor of the Journal of Computer-Mediated Communication and the current editor of Language@Internet.